I rarely post photos on my blog and a big part of this comes from the fact that I don't own a proper camera. I've absolutely given thought to purchasing a good camera as I'm learning how important they are for identification and documenting your experiences in the field. However, the first major purchase on my radar is a new pair of binoculars. Dragging around an old pair of Bushnells has made me a bit self-conscious but they do get the job done. I own a spotting scope I'm happy with now but it's time I upgrade my bins.

Anyway, right now I'm restricted to using my iPhone for wildlife photography, which is surprisingly efficient if you're not looking to get stellar shots but rather are using the photos for identification or submission to the OBRC. iPhone-scoping and iPhone-binoscoping have allowed me to get records photos that were never possible before. Supporting photo evidence always makes writing a report easier.

For all of my iPhone photos, you can visit my Flickr page at www.flickr.com/photos/jeremyhatt/
A warning to be prepared for some silly friends photos on my Flickr page. I have my photos broken into sets.

Some of these photos have been altered with Instagram as well. More to come! 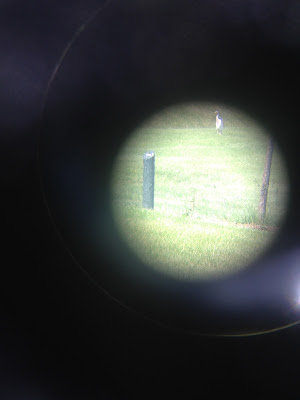 This Cattle Egret was our first stop in Keswick. My second of the year. First was at the Hillman Marsh Shorebird Cell in May. 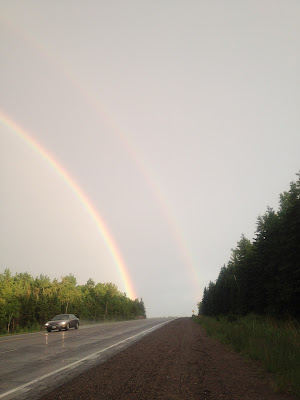 We saw this gorgeous double rainbow over the Trans-Canada Highway. I loved how the highway actually went to the end of the rainbow. 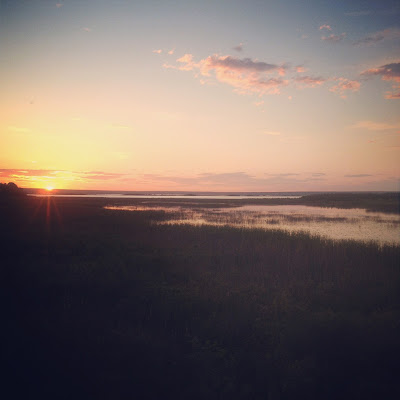 Sunset over Pumpkin Point Marsh, Sault Ste. Marie. This is where we photographed the region's first-recorded Common Gallinule, a sighting we were quite proud of. 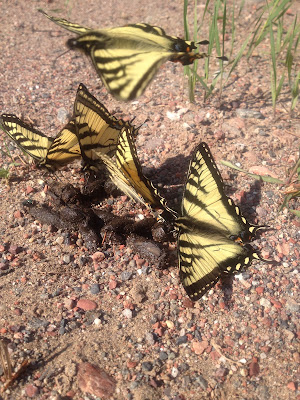 In the north, Eastern Tiger Swallowtail is replaced with the Canadian Tiger Swallowtail, abundant along the Trans-Canada and along Everard Road, Thunder Bay County, pictured here. These butterflies were getting nutrients from dung on the road. 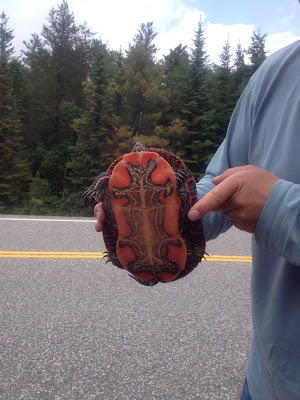 We rescued this Painted Turtle off the highway. There are 4 subspecies of Painted Turtle in North America: Western, Eastern, Midland, and Southern. In Ontario, any Painted Turtle seen south of Lake Superior is the Midland subspecies. In Northwestern Ontario, we get the Western subspecies, pictured here. The darkly-marked plastron and range identify this subspecies. 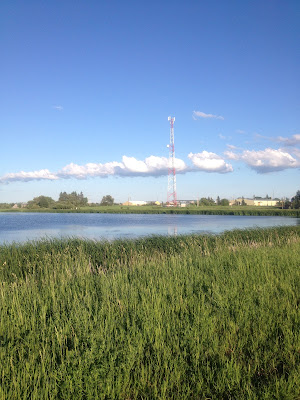 Emo Sewage Lagoons. One of many locations we checked multiple times for Eared Grebe.

I'm finally getting around to sharing my complete lists for the trip to Rainy River that Mark Field and I took.

We left on June 6th from Toronto and returned on the 11th.

Here is our rough itinerary:

We first drove to Keswick to get a Cattle Egret, which Mark needed for his year list. Success. We then drove the 400 north, which eventually turns into 69, the Trans-Canada-Highway. This we followed through Sudbury and eventually ended the day at Pumpkin Point Marsh, Sault Ste. Marie. We camped over night in the Sault and then got back on the Trans-Canada (here the 17). We drove to Thunder Bay, that night camping once again on Everard Road. The following day we finished the drive to Rainy River along the Trans-Canada (here it's 11). We stayed in Rainy River until the 11th. During our stay, we visited most hotspots in the area, camped at Harris Hill Resort, and on one night, visited Baudette, Minnesota, to have dinner. This wasn't our only travel into the U.S. We decided to drive back through Michigan to get back to Southern Ontario. We stayed a night in Wawa before this drive. We took the 75 to the breeding grounds of the Kirtland's Warbler near Gaylord, Michigan, then continued driving down to Highway 69, taking this east to Sarnia. We stayed at Walpole Island that night and on our last day, traveled south to visit my family in Leamington, visited the Onion Fields and Hillman Marsh for Dickcissel, and then drove north on the 401 to get back to Toronto. An amazing cross-province trip.

Birding hotspots visited (from start of trip to finish):

Pumpkin Point Marsh, Sault Ste. Marie
- highlight included the first record of a Common Gallinule for the Sault Ste. Marie birding area, which Mark iPhone-scoped a photo of. We were very proud of this record. Here we ran into Tyler Hoar who gave us many helpful tips for the area as well as what we could expect in our visit to Rainy River.

Lake Superior Provincial Park
- a short visit only. Did not enter the gates.

Wawa Sewage Lagoons, Wawa
- We visited this location twice, once at the beginning of the trip and once more at the end of the trip (and camped nearby). Highlights were a hunting Bald Eagle over the ponds, our first Northern River Otters for the trip (2nd visit), our first-of-year Eared Grebe (OBRC-report submitted, 2nd visit), Lesser Scaup in numbers, and our first Common Goldeneye chicks, which are adorable. Tyler had warned us we would be sick of them by the end of the trip.

Everard Road/Black Bay Fen, Thunder Bay County
- highlight was a good selection of breeding warblers, including many Mourning Warblers singing, and our only Gray Jay on the trip (a juvenile, which neither of us had seen before...lifer plumage!). It was here that we encountered the worst of the mosquitoes on the trip at the end of Everard Road where the Black Bay Fen begins. We could not stay in the area long. We tried for owls here but to no avail. Earlier in the year, however, we did get Sharp-tailed Grouse at this location on our first trip to Thunder Bay with Andrew Keaveney.

Rainy River Sewage Lagoons
- highlights included 3 Wilson's Phalarope, many American White Pelicans, and Marbled Godwit. We tried this hotspot many times for Eared Grebe but the individual in Wawa was our only sighting.

Fred's Road Marsh, Rainy River
- the best spot to listen for Yellow Rail, which we did not hear anywhere we visited during the trip. This was by far our biggest miss and the species we put in the most effort for. However, we did hear Le Conte's Sparrow here and it was quite a journey to throw on boots and wade out into the middle of the marsh. A tough but worthwhile experience as it was quite dramatic with a thunder storm rolling in and seeing lightning in the distance.

Harris Hill Resort/Windy Point
- a wonderful place to camp and very helpful staff. Highlights here were many but the best was my lifer Franklin's Gull, some of the first individuals to return in 2012. We had planned to take a boat out to get a closer look but weather and time did not permit.

Wilson Creek Road, Rainy River
- we tried here a few times for Eared Grebe but highlights ended up being Yellow-throated Vireo and Red-bellied Woodpecker, our only occurrences of each species on the trip.

Hurkett Cove Conservation Area
- not too much around but we did get a single Tundra Swan at this location, our only one for the trip.

Pukaskwa National Park, Thunder Bay County
- a beautiful national park that we spent a decent amount of time in, taking in the incredible scenery while searching for Black-backed or Three-toed Woodpeckers, and Spruce Grouse. We didn't get any of those species but we did luck out with a Lesser Black-backed Gull (OBRC report being written), as well as our first Black Bear. Just outside the park we had our only Moose on the trip, a huge male.


Aguasabon Gorge, Thunder Bay County
- an absolutely gorgeous waterfall off the Trans-Canada. Well worth the visit. Not too much in the way of birds but some of the most dramatic landscape we saw on the trip.

Guide's Rest, Michigan, United States
- it was an absolute wonder to be able to visit the last remaining stronghold of the Kirtland's Warbler on their breeding grounds. To see a male singing was unbelievably special and although these birds didn't count for my big year, it was a pleasure to see and hear them.

Walpole Island
- we tried Walpole for King Rail but did not have any luck. We did, however, get Least Bittern here, our only one for the trip.

Thanks to Mark for putting this together.

Species in italics were not seen within Rainy River County.
Bolded species were lifers

We submitted 35 checklists from Rainy River to eBird and 75 lists from the overall trip.


Butterfly list to come.
Posted by Jeremy Hatt at 15:37 2 comments: